Stephen is also the writer and director of Discovering Savannah.

My first screenplay was titled “Mandown”.

Growing up I played lacrosse in high school and then later I played on the club lacrosse team at ASU.  During my time at ASU the team took a trip to Vail, CO to play in their annual lacrosse tournament.  They have competition for all ages: Elementary school, High School, College, and old men, but they probably call it something else.  That was the only time that our team from ASU played in that tournament.  Then after 10 years, we had a reunion in Vail, CO which inspired me to write my first screenplay.

But before we get more into the screenplay I want to talk about my initial writing phase which is my songwriting period. Even though I don’t have a musical bone in my body I love music especially the lyrics and how they can inspire, motivate, and carry you through the most difficult times.  Now in Discovering Savannah, I made James a huge Van Morrison fan as I am in real life.  This is because when reading about how to get started as a screenwriter from screenwriters that I admired their advice was to write about what you know about.

Now for some reason, I thought the songs I was writing were…well… I just thought they were awesome.  However, my wife set me straight.  So one thing I’ve been doing now for over 30 years is to write down thoughts, ideas, updates to lyrics or a screenplay on index cards or a notepad.  Now to help you understand the punchline below you need to know that both my wife and I don’t like to curse.

So as I was leaving our house…well, basically our shack at that time I wrote down the first line of a song that was just coming to me.

First line on index card that I wrote down just before leaving our shack and left on the kitchen table.

Oh no it looks like the neighbors have called the cops.

Second line on index card when returning home that I noticed my wife has added.

Oh no it looks like he’s writing another song that socks.

Now back to Mandown and our college lacrosse reunion which I entered into the first project greenlight competition.  In Mandown the ASU lacrosse team is having a 20-year reunion in Vail, CO.  Then soon after everyone arrives we realize that there is another 20-year event taking place in Vail.  That weekend 20 years ago which is the last time all of them were in Vail at the same time a college girl was murdered. Every year since then her mother shows up at the tournament and sets up a booth handing out flyers and asking for any information that could potentially help her find her daughters murderer.

I play Jake who’s best friend from college ended up marrying my girlfriend from college.  My best friend went on to become a police officer and after talking to the murdered girls mother tries to help her while he’s in Vail.  This help though leads to DNA evidence that points to Jake as being the killer and forces me to investigate this 20-year murder mystery or spend the rest of my life in jail. 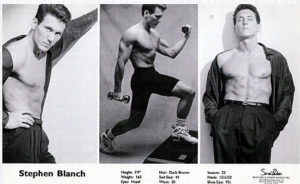 After the Marine Corps when working as a personal trainer and an aerobics instructor I was trying to generate interest in financing a fitness video. This was the early 90’s, damn I’m old.  Although I never did make that fitness video recently I’ve been thinking that I should reconsider it and make one titled ‘Fit After 54’.  Damn, I’m old! 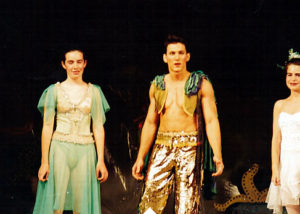 A fellow aerobics instructor who also had a dance studio in Beaufort, SC said she didn’t have a single male who participated in her classes.  She asked if I could help her out and dance in the ballet her girls were putting on.  It was a lot of fun and I just remember how hard all of those girls worked. 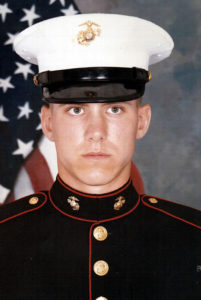 I’m proud of my 4 years in the Marine Corps but was never in any harm’s way. I’d like to thank all the men and women who sacrificed so much more than I did and will forever owe you a debt of gratitude. 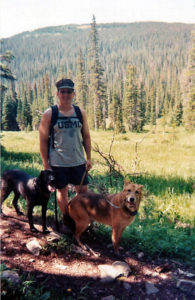 Here are my two running and hiking buddies from when we lived in CO. I have so many fond memories of those times in the Rockies. I Love the John Denver lyrics ‘He was born in the summer of his 27th year coming home to a place he’d never been before’. Then later from the same song ‘Now he walks in quiet solitude the forest and the streams seeking grace in every step he takes’. If you’ve heard any of my screenplay you know that I can talk about lyrics for too long so I’ll leave it at that. 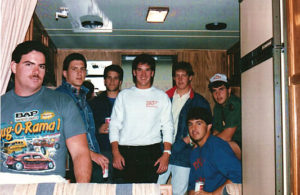 Who would rent a motorhome to the ASU club lacrosse team? One of my fondest memories was the spring trip we took in that motorhome in the mid-eighties to play Berkeley in San Francisco. When we had a mini-reunion over 10 years later it inspired me to write my first screenplay ‘Mandown’ that I entered into the first Greenlight Screenplay competition. Two out of the three reviewers in the first round loved it and the third thought it was the worst thing he’d ever read.